At the moment, the Star Wars Addon surpasses most of mods for Minecraft PE, based on this movie. The addon does not contain so many creatures from Star Wars, but they are all unique and have original features. In total, there are 7 new creatures and a set of things that will take you to the Universe of Star Wars. New creatures are divided into good and evil. Probably you will find good companions and fight back evil.

R2-D2 is the most popular droid of all and it can become your friend. Its main weapon is laser beams, and an additional function is the storage space for items. To tame it you need to set the Luke Skywalker skin and give the bread to the R2D2. Redstone in the Star Wars Addon is the main subject of taming.

BB-8 is the second droid that can be tamed. It performs almost the same tasks as the first droid, but its feature is a funnel that sucks objects located on the ground. The droid adores the redstone and will follow it anywhere. Tame it and then your team will increase.

C2-B5 serves the empire and will never serve you. You very often can meet it at night, and your droids will automatically fight it. It’s not as strong as the previous ones, but if there are a lot of them then it probably can seriously reduce the number of your personal droids.

Storm Troops are your main enemies and now you always have to look back. They spawn in all biomes and behave aggressively, but that’s not all you need to know. Storm Troops are of two types: the first is conventional and not as strong as the second one, which is twice as strong and faster. Kill a couple of stormtroopers to see the drop.

All Terrain Armored Transport is one of the most memorable vehicles in the movie. It is simply huge and is a very powerful weapon during attacks. You need to make more efforts to defeat it. In addition, the AT-AT is quite rare and spawns a certain number of soldiers until you blow it up. 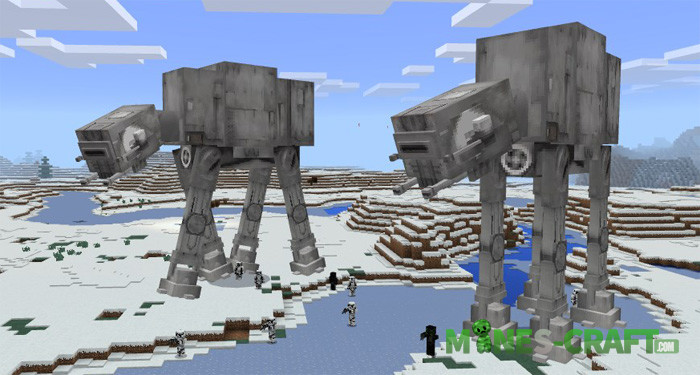 You can not do without Jedi suits and weapons and of course laser swords. All this is added to the Star Wars Addon for the evil and good sides.